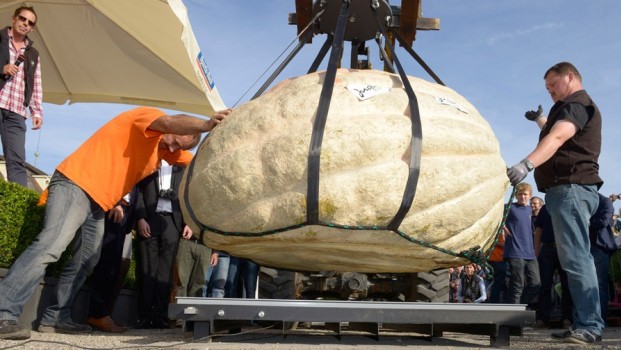 Each year the town of Blühendes Barock in Ludwigsburg hosts the European pumpkin weigh off championships.  Whilst this years winner was a whopping 856Kgs, it was last years winner that made the headlines for being over a metric tonne in weight.  A staggering 1,054Kgs!

This earned the grower, Beni Meier, a place in the record books as having the biggest pumpkin ever grown.  It was also the first time a pumpkin had broken the metric tonne mark, around the weight of a small family car.

The 3 biggest pumpkins stay on until the festival ends on November 8th 2015 for people to view.

At the end of the festival the pumpkins will be opened and the seeds sold on.